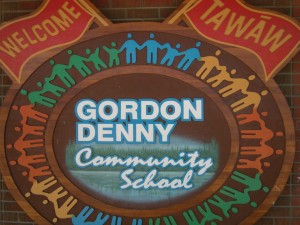 Gordon Denny Community School is named after a former resident of Air Ronge.  Gordon Denny moved to Air Ronge in the mid 1960’s from the Livelong, Saskatchewan area to become manager of the Saskatchewan Fisheries Cooperative.  As a respected member of council, Gordon made many contributions to the development of the community and surrounding area.

Gordon and his wife, Betty, built their home on Norseman Street, where they lived with their son, Shane.  Gordon lost his life in a tragic accident in August, 1983.  It was the Council of the Village of Air Ronge that wanted to create a permanent tribute to Gordon, so a decision was made to establish a playground named after him in the area where the school now stands.

When Northern Lights School Division selected the site as the location for a new school the Air Ronge Council requested that the school be named after him.  The school officially opened on September 19, 1990.

The school logo was developed by Mrs. McKay’s class in 1992 as part of a school contest.  They decided on parts from several of the students:  a student, some books, the sun’s rays and teachers, parents and the neighborhood.  Myles Charles, a graphic artist was invited to come in to help them finalize the logo.  The rough copy was taken to Mr. Chris Lee for the finishing.  It was truly a school and community undertaking as various people helped out.  Mr. Ratte got the plywood while Mr. Kozowy cut it in a circle.  Mrs. Friesen drew it while Mrs. Kustiak and Mrs. Glauser painted it.

The logo represents students, education, parents, teachers and community.  The student was the most important so it was put in the middle.  The open book represents learning, the circle represents their parents and family and the teachers and community which surrounds them with help and care.  The rays symbolize that learning becomes part of the student and is then passed on to the home, the community and the world.  Later a new beautiful sign was carved and painted by Roger Jerome and hung at the front entrance
to the school.